As the director of the 1973 Aquarius Festival, the event which led to
the recreation of the Nimbin village as the counter cultural capital
of Australia, Graeme has had a long association with the village and
the campaigns for social change arising from it.

Peacebus is Graeme’s long time and far travelling vehicle and it is
now worn out and in need of replacement. It has had many adventures
including the plunge into the creek behind Nimbin after last year’s
Mardi Grass.

“Graeme has done so much for Nimbin and the Northern Rivers over the
years. Indeed the HEMP Embassy exists today in the building that it
does because of Graeme’s initiative in acquiring it for the 1973
Aquarius and keeping it in community ownership afterwards,”  said
HEMP Embassy President, Michael Balderstone.

“Come along, support him and keep Peacebus rolling on by making a
donation. Not everybody can live in a van and devote their life to
political and cultural activism.”

“It’s a great effort. For example, many don’t realise that Graeme
introduced, among other ideas, mass lantern events to the area. That
little seed has grown into the amazing annual Lismore Lantern Parade
of this Saturday’s solstice.”

The Hemp Bar High Tea will be a dress up affair. Wear a hat!

SPECIAL ANNOUNCEMENT: A generous donor has offered to match the next
$1800 dollar for dollar. Donate now and double your money! 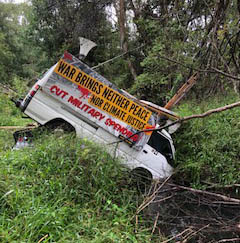