I would like to encourage The Hemp Embassy and your networks to consider writing a submission to the Senate Inquiry into barriers to patient access to medicinal cannabis in Australia. This inquiry is the chance for organisations and for all individual medical cannabis users to have input into the failures of the current regulatory framework. The submission date closes on the 17th January 2020.

The rules of cannabis: NZ Govt releases draft legislation for how cannabis could be bought and sold [NZ Herald]

New Zealanders have been given a first glimpse at what they’ll be voting for in next year’s cannabis referendum. The Government today announced the draft Cannabis Legalisation and Control Bill, designed to govern the recreational cannabis market should it come into effect. The legislation specifies a minimum age of 20 to use or purchase a recreational cannabis product. The draft legislation goes on to prohibit the consumption of cannabis in public spaces, limiting use to private homes and licensed premises.

The draft Bill is not yet complete, and at this stage mainly details the areas most relevant to end consumers such as home grow provisions, possession limits and retail regulations. A summary of New Zealand’s proposed model compared to that of Canada and Uruguay is given.

More than 20 heads of department at Sydney’s St Vincent’s Hospital have urged the Premier to scrap strip-searching and adopt a pill-testing trial amid an anecdotal rise in the number of panic ingestions at music festivals. In the letter to Premier Gladys Berejiklian, Dr Jennifer Stevens wrote that she and her fellow senior clinicians believed that a public health approach should be prioritised over criminal enforcement.

How many have to die before they’ll listen? [The Greens]

Last summer, six people died at summer music festivals in NSW. We’re only two days into this summer, and we’ve already had another tragedy. You have to ask: How many people have to pass away before the major parties protect young people at festivals? 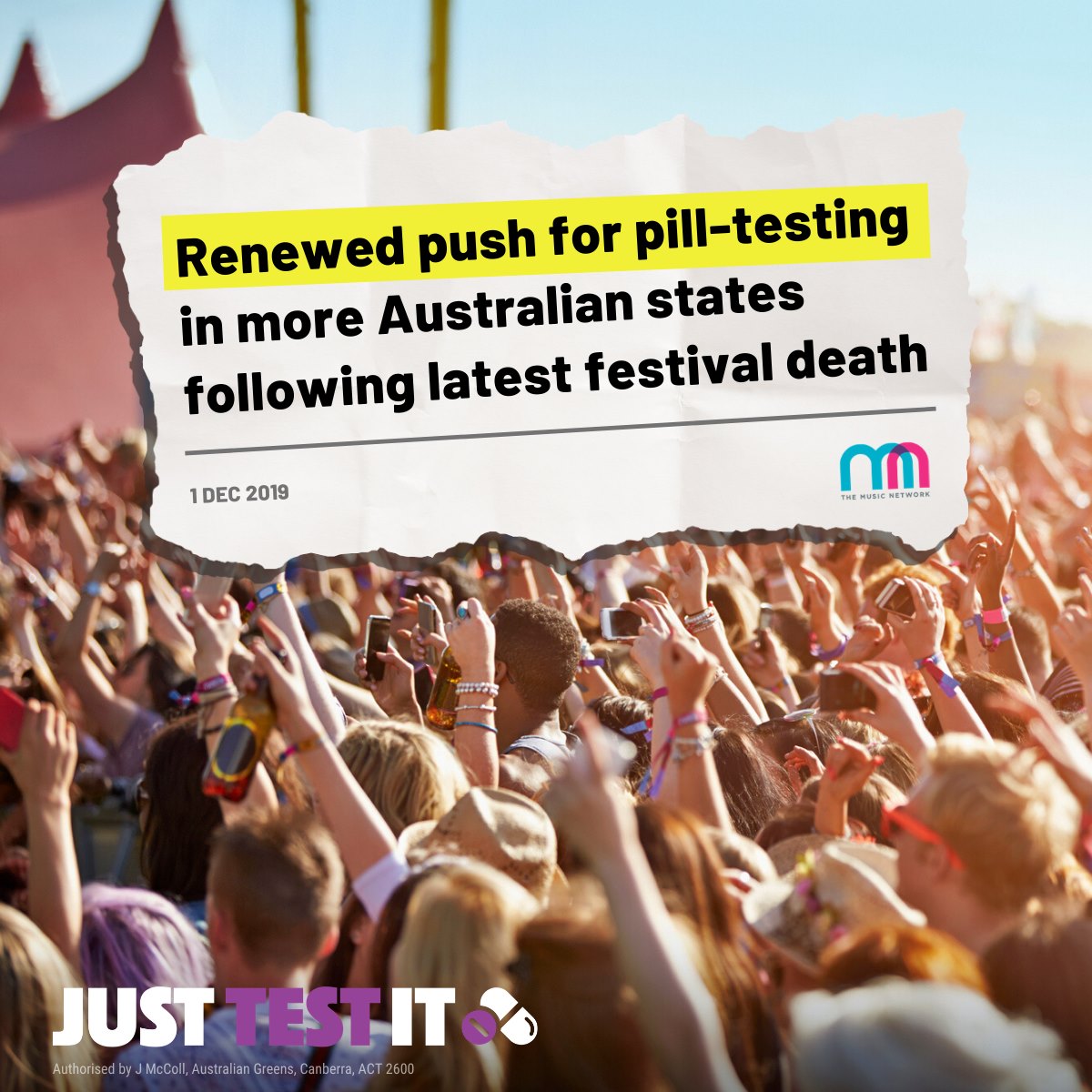 Missouri issued close to 22,000 medical marijuana cards since July 4, the St. Louis Post-Dispatch reported. Researchers with the University of Missouri’s Economic and Policy Analysis Research Center previously estimated that the state wouldn’t reach that many patients until 2021.

People with chronic pain and age-related macular degeneration can now get medical marijuana cards in Minnesota.

Three years after voters legalized the plant for adult use, things are finally picking up for the cannabis industry in Maine. With the application set to go live from the state Office of Marijuana Policy on December 5th, many companies are already doing what they can to get prepared. As with any state to legalize marijuana, there are plenty of hoops for these businesses to jump through in order to obtain a license to grow, process or sell marijuana. If all goes as expected, the first sales are expected to happen mid-March 2020.

In the Seattle-Tacoma, Portland, and San Francisco metro areas, more adults 18-and-older have used cannabis in the last 30 days than cigarettes, according to Nielsen data outlined by the Seattle Times.

Three Michigan cannabis stores were open for the state’s first legal adult-use sales beginning at 10:00 a.m. 1 December 2019. The very first transaction was a joint preroll purchase by two of the most well known cannabis activists in the state, John Sinclair and Ryan Basore. Sinclair’s first legal recreational purchase came 50 years after he was arrested and sentenced to 10 years for possession of two joints, which he fought alongside residents of Michigan, culminating in the John Sinclair Freedom Rally held in Ann Arbor, 1972, headlined by John Lennon, Bob Seeger, and Stevie Wonder.

Leafly documents that there were 1,290 direct full-time jobs in the state’s medical cannabis industry at the end of 2017. By January 2019, it maintains there were 10,358 Floridians employed in 14 state-licensed Medical Marijuana Treatment Centers (MMTC) and in nearly 90 dispensaries statewide, adding more than 9,000 full-time jobs as cannabis employment grew by 703 percent in 2018 in the Sunshine State, which legalized medical marijuana in 2016.

Health Canada said that in writing the new regulations it paid close attention to the edibles evolution in the U.S., noting particularly that the 10 mg limit drew on “lessons learned” in those states that had legalized cannabis.

Businesses wanting to apply for a licence to grow and process cannabis in Guernsey can now get help from a guide. The guide gives advice from the government including how to import and export products derived from cannabis. In June 2019, the Bailiwick of Guernsey approved cannabis growing for certain uses.

Brazil health regulators have approved a set of rules to allow for medical cannabis use; the rules, however, would not allow for domestic cultivation and the program would rely solely on imported cannabis products.

With the abundant land, a large labour force and an ideal climate for cannabis cultivation, investors have been keen to scout out the continent, and particularly southern Africa. Africa offers growers clean soil, little pollution and many high-quality strains of CBD, one of the most abundant cannabinoids found in hemp, ideally positioning the continent for global exports.

By now, everyone knows that to export medical cannabis to Germany, which is by far the largest importer of medical cannabis flower in the world, achieving European Union Good Manufacturing Practice (GMP) is a prerequisite.

‘Uneven European landscape for medical cannabis is like telling a diabetes patient he can’t use an insulin pen because it is illegal in the country he is visiting’.

Following 65 years as one of pop culture’s most famous stoners, Willie Nelson has quit smoking cannabis. The country star told KSAT Radio in San Antonio, Texas, that he decided to stop smoking to aid his health. “I have abused my lungs quite a bit in the past, so breathing is a little more difficult these days and I have to be careful,” the 86-year-old said. “I started smoking cedar bark, went from that to cigarettes to whatever,” he continued. “And that almost killed me. I don’t smoke anymore. I take better care of myself.”

Over 500,000 Bootleg Vape Carts Seized in the Last Two Years [The Marijuana Times]

One way or another, the saga over bootleg THC cartridges will be one that affects the cannabis community for some time to come. And now, we have a new Associated Press report that over the last 2 years authorities across the United States have arrested some 120 people and have seized over 500,000 illegal vape carts. In one bust in Minnesota alone, law enforcement found 77,000 cartridges.

A good lighting system will result in both higher yields and lower energy consumption.

Could CBD And Cannabis Eliminate The High-Cost And High-Stakes Of Current Psoriasis Medicines? [The Fresh Toast]

Often triggered by stress, new studies are showing that psoriasis can be better managed by diet, oral health, and even cannabidiol.

What roles do herbal and classic natural medicines have in common with modern medical research when it comes to using cannabis for medicinal purposes?

Medical and recreational use of marijuana has skyrocketed in recent years. Yet strict research rules mean doctors are flying blind when it comes to safety, dosing, and effectiveness. That’s got to change — and fast, argues one expert.

Lighting Up For Better Skin: Can Marijuana Help Acne? [The Fresh Toast]

In some studies, THC appears to ease inflammation inside and outside the body, therefore decreasing the threat of acne.

An historic House bill to decriminalize marijuana is moving in the U.S. Congress with support from both Democrats and Republicans —legislation that would have a dramatic impact on people convicted of using or possessing the drug.

Democrats Are Building Their 2020 Presidential Campaigns. Where Do They Stand on Cannabis Reform? [Cannabis Business Times]

With the midterms behind us, we look ahead to how cannabis might shape the U.S. 2020 election.

DEA to Grow Even More Garbage Cannabis in 2020 [Portland Mercury]

The DEA explains that 7,000 pounds of their finest is solely allocated for the “estimated medical, scientific, research, and industrial needs of the United States, for lawful export requirements, and for the establishment and maintenance of reserve stocks.” Bummer to be any of those recipients, seeing as how it’s the worst of the worst: cannabis grown exclusively for over 50 years by the Three Stooges of cannabis production, the University of Mississippi.

Hemp growers nationwide scaled up this year after U.S. Congress legalized the non-psychoactive cannabis. They hoped to cash in on the booming market for cannabinoids such as wellness darling CBD, an ingredient in oils, tinctures and salves. But as harvest winds down, it’s likely that many growers will go bust. 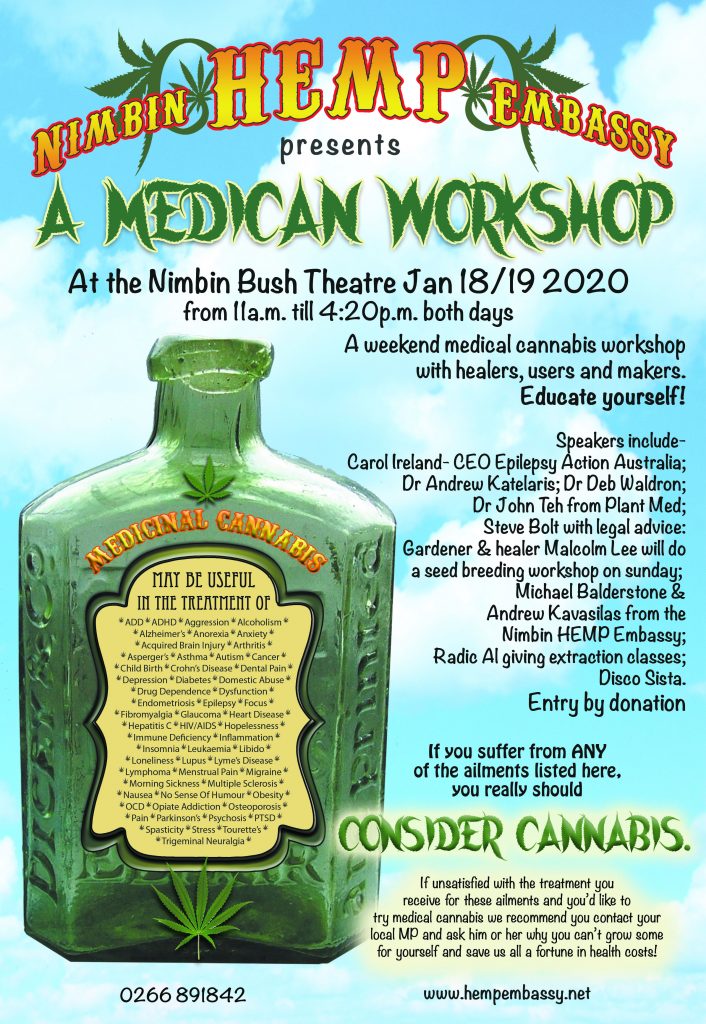