Seven of the 30 Nimbin ‘Lane Boys’ received jail sentences today during sentencing in the Lismore Local Court but all were granted bail to appeal. The 23 others dealt with received a mixture of suspended sentences, or adjournments.

Medicinal cannabis is now legal in Queensland but only a handful of doctors have taken up the opportunity to prescribe it. Health Minister Cameron Dick said there had been 10 applications for single-patient prescribers for medicinal cannabis.

Medicinal cannabis was legalised for use under strict conditions last year. But advocates say it’s still extremely difficult to access. Parents of children with severe epilepsy are one of the main groups affected, and many are at their wits end.

University of Queensland researchers are concerned the recent legalisation of medicinal cannabis in Australia may give rise to super-potent cannabis concentrates with associated harmful effects.

For the first time, Australia has a long-term framework for reducing and preventing the harms associated with alcohol and other drugs through the agreement of a ten-year National Drug Strategy. This is a national strategic framework built on the principles of partnerships, coordination and collaboration, national direction and jurisdictional implementation, and evidence-informed responses.

More Australians are dying from accidental opioid overdoses each year, with prescription painkillers rather than heroin now accounting for two-thirds of the fatalities, latest Australian Bureau of Statistics data shows. An analysis of finalised ABS data by researchers at the National Drug and Alcohol Research Centre found 68 per cent of the 668 overdose deaths in 2013 were related to pharmaceutical opioids – a far cry from the heroin epidemic of the 1990s when the majority of opioid deaths were caused by illicit drugs. 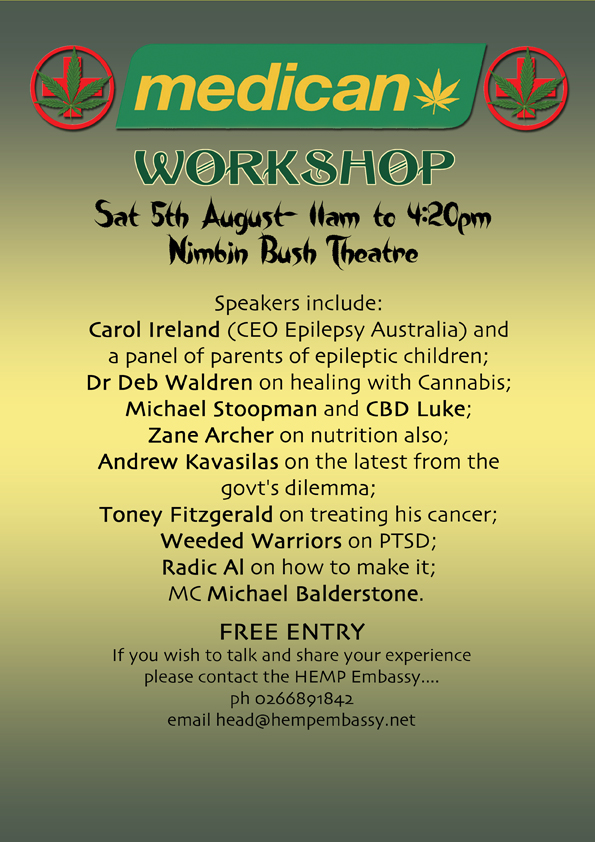 The Chief Coroner and Police have issued an “urgent warning” after seven deaths this month in the Auckland region they believe are linked to synthetic cannabis. Chief Coroner Judge Deborah Marshall issued the warning, noting that there had also been a surge in hospitalisations believed to be linked to the drug. “While the Police and coronial investigations are still at an early stage, and the final causes of death have yet to be established, the number of cases where synthetic cannabis appear to have been a contributing factor has prompted me to issue this public warning.” But New Zealand Drug Foundation executive director Ross Bell says it is far too premature to even give a name to what this drug may be. “No testing has been done, the findings of the deaths haven’t been made; the Police cannot make the claims that they’ve made that these deaths are synthetic cannabis related.”

A leading drug researcher is warning against using the words ‘synthetic cannabis’ to describe the psychoactive substance that has killed seven people – and he says a regulated natural cannabis market could be worth investigating. The surge in synthetic drug use is a global health risk, Chris Wilkins from Massey University warned on The AM Show, and it’s dangerous to call the drugs synthetic cannabis. “People then expect the effects to be like cannabis, but these are completely different compounds and are much more potent, and they have different effects than cannabis,” he said.

An emergency response team has been set up to identify what is in the synthetic cannabis that has caused eight deaths in the past month. Police said this week they were aware of reports that there was a “bad batch” of synthetic cannabis but there was no scientific evidence to back that up.

Take me higher! Psychedelic church of cannabis opens in the USA, in pictures [The Telegraph]

An abandoned Lutheran church, which as stood in Denver since the early 1900s has reopened as a place of workshop for the followers of brand new religion “Elevationism”.

For cannabis, the consensus based on available data is that decriminalization has either no detectable effect on use, or increases it to a very modest extent. Indeed, research suggests that most Americans were unaware of the penalties for cannabis possession in their state.

As more U.S. states legalize marijuana use, 45% of Americans say they have tried marijuana at least once, a new high in Gallup’s trend since 1969.

Mr Trump’s Task Force on Crime Reduction and Public Safety, led by Attorney General Jeff Sessions, is anticipated to release a report next week that criminal justice reform advocates fear will link marijuana to violent crime and recommend tougher sentences for those caught growing, selling and smoking the drug.

Is microdosing the future of marijuana? [Vice]

The creator of LSD, Dr. Albert Hofmann, believed that ingesting tiny amounts of the drug could have therapeutic value, and so-called “microdoses” have since been proposed as a substitute for everything from Adderall to marriage counseling. Now, as more states legalize marijuana, the trend that began with hallucinogens has grown to include microdoses of THC, the main psychoactive ingredient in weed. VICE News traveled to Portland, Oregon, to meet Ethan Ernest, creator of marijuana microdose pills called Mirth Control, which contain a fraction of the THC found in a typical joint or batch of edibles. Ernest compares Mirth Control to “open-source Xanax. Other products in the new weed microdosing category push the envelope even further with suggestions about purported medical uses.

Devon and Cornwall Police have admitted it has given flawed drug seizure figures to the Home Office after a Herald investigation. For several years The Herald has requested the total number of drugs seized in Plymouth by police. By comparing drugs seized between April 1 and March 31 the following year, The Herald has highlighted the changes and trends in the different drugs which are captured by police. However, following unusual figures last year, which saw the number and quantity of drugs seized plummet, and noticing discrepancies in the last years figures – which did not correlate to Herald reports of police operations involving cannabis farms discovered in Plymouth – we questioned the force.

An 82-year-old MP who has been a longstanding campaigner for cannabis legalisation is to launch a new attempt to change the law. Newport West MP Paul Flynn claims the UK is suffering under the “permafrost of ignorance” and wants the medical use of cannabis legalised. He claims that “prohibition that is killing people”.

Professor Green: Is It Time to Legalise Weed? [BBC]

As his name suggests, rapper and documentary maker Professor Green has a past relationship with cannabis. Before finding success as a musician he sold weed, and between the ages of 16 and 24 he smoked cannabis every day – but things have changed since then. With those days behind him, Professor Green, aka Stephen Manderson, embarks on a uniquely personal film to take an in-depth look at our relationship with Britain’s most popular illegal drug and explores the arguments for and against legalisation.

Legalise cannabis as treatment of last resort for MS, says charity [The Guardian]

Ten thousand people with multiple sclerosis in the UK should be allowed to use cannabis legally in order to relieve their “relentless and exhausting” symptoms, experts in the disease have told ministers. The MS Society claims the one in 10 sufferers of the condition whose pain and spasticity cannot be treated by medication available on the NHS should be able to take the drug without fear of prosecution. The evidence on cannabis’s effectiveness, while not conclusive, is now strong enough that the government should relax the ban on the drug for MS patients who have no other treatment options, the society says in a report.

Chinese authorities have arrested two Canadians in the capital Beijing for allegedly smoking marijuana. According to Radio-Canada, officials entered a hotel room where members of the travelling equestrian show Cavalia were staying on 14 July. The public broadcaster said officials made a number of arrests and two Canadians remain in prison.

The number of people registering to buy newly legalized marijuana in Uruguay jumped by almost 50 percent in the first week of sales, according to official figures released Wednesday.

Nearly 90% of the patients who used medical cannabis reported a significant reduction in the pain they experienced. Over 80% of them considered the effects of cannabis to be equal to or greater than those of narcotic opioid painkillers. Read more here.

Seniors need more weed. Medical marijuana could quite literally become the miracle drug that lifts many seniors out of prescription-based debt and liberates them from consuming the cocktail of potentially harmful drugs many must use on a regular basis. Since cannabis is so effective in treating many disorders, it can have an overall therapeutic effect that vastly improves the well-being and quality of life of our aging population.

Indonesia’s president, Joko Widodo, has told law enforcement officers to shoot drug traffickers to deal with what he called a “narcotics emergency” facing the country.

President Rodrigo Duterte has called for the introduction of the death penalty in the Philippines for a range of offences – including drug possession – as his country’s brutal slaughter of people who use drugs continues.

When Clark Martin tripped on magic mushrooms for the first time, he was flanked by two researchers in a small room at New York University.

The Fed’s regular Beige Book surveys of economic activity across the country in April, May and July all noted the inability of employers to find workers able to pass drug screenings.

Medical Researchers Are Steps From Legalizing Ecstasy. Here’s How They Did It. [Reason]

Starting this year, phase-three clinical trials for MDMA will begin with a goal of ultimately enrolling somewhere between 200 and 250 patients across 14 sites in the U.S., Canada, and Israel. Emerson, the former pharmaceutical researcher who is leading the study, is focused on maintaining its scientific integrity. “We want to do everything up to snuff,” she says. “There can be no question about our methods.” MAPS has jumped through numerous hoops since Grob submitted his first protocol in the early ’90s, and the group has more work to do. But the end is in sight.

Australia’s psychiatrists are urging the government to lift the ban on nicotine-containing electronic cigarettes, saying their mentally ill patients, many of whom are heavy smokers, could “significantly benefit” from the devices.

We released the latest chapter in the international Druglawed saga today, download it in HD for only $4.20 at this link: https://druglawed.vhx.tv/buy/druglawed-2-specialis…

15 September 6 – 8pm @ Byron Community Centre, 69 Jonson Street Byron Bay NSW. Free Admission. Come along to hear Greens MP David Shoebridge talking about the evidence-free roadside testing regime. We will also hear from locals and experts about broader concerns about policing and drugs, particularly as they apply in Byron and surrounds. Come with a comment, a question or just to learn about what’s going on! Limited number of tickets available.

EGA’s 2017 Psychedelic Symposium will be a botanical, academic and lifestyle conference – with a pinch of psychedelic energy.  The program will span three days and three nights, featuring more than 50 lectures from diverse fields covering the botanical, academic, and philosophical, to arts and drug law reform. Accompanying the main program will be workshops, panel discussions, a marketplace, and much more!!