Next weekend’s Medical Cannabis workshop at the Bush Theatre in Nimbin has a line up of impressive speakers. “We’re only doing a few of these popular workshops a year now and I urge anyone wanting to learn about what’s going on in the fast emerging new age world of medical Cannabis to try and come along,” says Michael Balderstone, President of Nimbin’s HEMP Embassy who is hosting the event.

Guest speakers include Michael Stoopman who has an extra ordinary tale to tell re healing a massive tumour on his neck. Diagnosed with a common form of skin cancer in 2014, a squamous cell carcinoma, that progressed into his carotid artery which started to bleed out in May 2016, he was given minutes to hours to live. Put on 520mg of morphine to ease his passing however after nearly a month in hospital he was discharged but then had an opioid addiction. He researched medicinal cannabis which fixed his cancer in 5 months and it then took 7 months to get rid of his morphine addiction. Since then he’s been helping people get over serious illness with his basic knowledge of the endocannabinoid system.

Michael will be speaking on Saturday, and hopefully Sunday, as will legendary medical Cannabis grower and maker Malcolm Lee, who was told by a judge recently he is an ideal person to be given a producer’s licence because of his expert knowledge of the plant. Livewire Dr Deb Waldron will be also speaking both days. An extraordinary Queensland healer who is now studying herbalism to bolster her pharmaceutical training she is an extremely popular and witty talker.

Local Solicitor Steve Bolt will speak on Saturday only with the latest legal advice for Cannabis users, especially on roadside drug testing. Also there for the weekend will be long time herbalist and healer Radic Al, members of the The Hemp Club demonstrating hemp seed oil extraction and explaining why we should all be on a daily dose of the highly nutritious wonder food now legal.

Rayman is coming from Taree to speak on how she saved her life with raw Cannabis juice. Naturopath Zane Archer will speak on his latest understandings including hemp plasma therapy. Andrew Kavasilas on the latest from the Governments struggle to introduce the law changes so urgently needed.  B J Futter from the Church of Ubuntu healing centre in Newcastle and a handful of other speakers to share their experiences using or making the medicine which has now gone mainstream in America as Time Magazine just told us on their cover.

Both days,  Sat 23 June and Sun 24 June, start at 11 am at the Bush Theatre by Mulgum Creek in the old butter factory on the north side of Nimbin. Everyone is welcome and donations greatly appreciated. Excellent food will be available at the Phoenix Rising cafe. 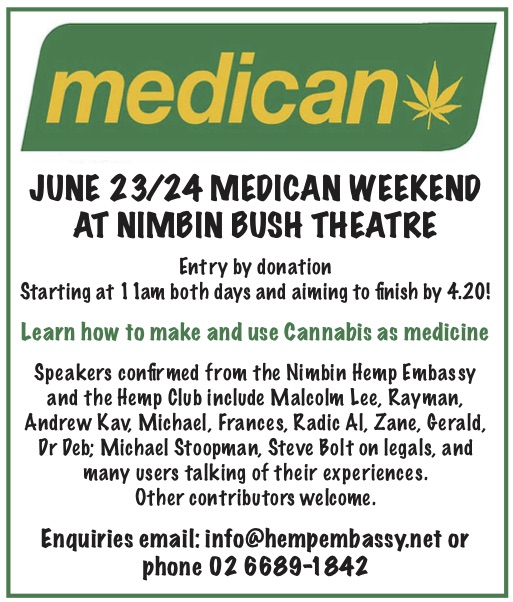