This is how we legalise it [The Greens]

On Monday in the Senate, I took the opportunity to outline our plan to legalise cannabis for adult use. As one of the many thousands of people to support our campaign to Just Legalise It, I want you to be one of the first to take a look.

This project aims to increase the current understanding of odd or unusual psychotic-like experiences in young cannabis users.  Unusual experiences include odd thoughts and experiences, like thinking people are out to get you in some way or seeing or hearing things other people say they can’t see or hear. People can have unusual experiences when using or not using cannabis.

The NSW and ACT synods of the Uniting Church and its service arm, Uniting, are spearheading the call to have illegal substances decriminalised for personal use in a movement backed by 60 organisations, including the Law Society of NSW, the NSW Bar Association, and the NSW branch of the Health Services Union.

“The cannabis oil is one thing that has kind of given us a little bit of hope about Archer’s future and what it’s going to look like going forward,” Mrs Johnson said. However, at $430 for four days’ supply – the equivalent of $40,000 a year – the cost of the cannabis oil had placed an enormous financial burden on the family, Mrs Johnson said. “It is killing us, the cost of it. But now that we have seen the benefits, we can’t not give it to him. “We are looking at selling the house to pay for it because there is no other avenue for funding.”

Tamworth will become home to an $8 million medicinal cannabis farm with council approving a massive development application. Cann Pharmaceuticals is the group behind the project and it hopes to get work under way by the end of this year and have production up and running by late 2019.

The Government’s “go-live date” is actually closer to mid-2020, not March next year.

The first recreational cannabis to be legally bought in Canada was purchased at midnight on Wednesday on the eastern island of Newfoundland amid queues of hundreds of people. Canada has become the second country after Uruguay to legalise possession and use of recreational cannabis. Medical marijuana has been legal in the country since 2001.

O Cannabis!
Our healing and nourishing plant!
True planetary love in all of us command.

With glowing hearts we see thee rise,
The Truth of Nature, strong and free!

From far and wide,
O Cannabis, we stand on guard for thee.

O Cannabis, we stand on guard for thee. 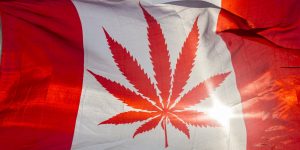 Recreational marijuana will be legal throughout the country, but rules will vary from province to province.

Canada legalizes marijuana: here’s everything you need to know [The Guardian]

Can I grow my own?: Federal guidelines allow recreational users to grow up to four plants per household, up to a metre tall. Most provinces have acceded to this suggestion, with some (like British Columbia) stipulating that the plants must be grown in a secure location out of public view. In Manitoba and Quebec, however, home growing is illegal. Landlords in some provinces are also pushing for the right to ban tenants from growing cannabis in their rental properties. Also: do not move your plants while they’re budding or flowering! Appearing in a public space with a blooming cannabis plant nets you a fine up to $5,000, or five years behind bars.

The legalization of cannabis in Canada for recreational-use, contravenes the key International Drug Control Convention, and is “not a healthy” lifestyle choice. That’s according to Viroj Sumyai, head of the independent UN-backed International Narcotics Control Board (INCB), in an interview with UN News.

As cannabis is legalized, let’s remember amnesty [The Conversation]

Before we celebrate, let’s take a moment to remember the Black and Indigenous peoples who have been overrepresented in Canada’s cannabis-related arrests, despite similar rates of cannabis use across racial groups.

Young drivers who use cannabis at higher risk of collisions for at least 5 hours, McGill finds [CBC]

Canada on Wednesday will become the largest country in the world to legalize recreational marijuana. That means it will be available under the law in seven more NHL cities (it’s been legal to adults in Denver since 2012). The move is a step forward for those who believe marijuana has been stigmatized and should be accepted as a form of treatment.

We spoke to dealers, cannabis farmers and edible bakers about their plans post-legalization.

For the purposes of marijuana consumption, Parks treats campsites as temporary private homes.

Which party is going to take a leadership role in advancing marijuana reform after the midterm elections? It depends on who you ask.

More busts indicate that state and local authorities in California continue to step up efforts to crack down on black market marijuana operations, a development that could help licensed businesses who’ve long complained that illicit operators undercut their sales.

Galaty runs the Fright Farm and adjacent maze off U.S. Highway 52 south of Zumbrota. This year, he decided to switch the four-acre maze to something different and established the Minnesota Hemp Maze.

With demand for medical marijuana surging in New Jersey, Gov. Phil Murphy in July called for a doubling of the state’s program, from six dispensaries to as many as 12.

The White House is planning on tackling cannabis reform after the midterm elections, according to Rep. Dana Rohrabacher, R-Calif. Rohrabacher tells FOX Business that the Trump administration has made a “solid commitment” to fix marijuana regulation. Rohrabacher says the president has spoken in support of legalizing medical marijuana on the federal level – and leaving the question of recreational marijuana use up to the states.

In one developed country, the government has found a way to legislate for recreational use of cannabis. In another an extremely sick child must be made to produce evidence of life-threatening symptoms before it can be prescribed for medicinal purposes

With similar moves towards liberalisation in some US states, Uruguay, Portugal and the Netherlands, there is a sense that momentum is moving away from treating cannabis as law enforcement issue, and towards its control and regulation for adult use in a sensible way.

Lithuania’s parliament on Thursday passed a law that will allow doctors to prescribe marijuana-based medicine in the Baltic EU state.

Latin American Legal Cannabis Industry Set To Be Worth Over $12.7 Billion by 2028, According to Prohibition Partners [Markets Insider]

Over the past 24 months, the Latin American cannabis industry* has emerged from the shadows to command the attention of the international cannabis community as over ten major markets have legalised medical cannabis. Legal cannabis sales are worth $125 million in 2018, but that number is expected to rise to $12.7 billion by 2028.

Cannabis health products are everywhere – but do they live up to the hype? [The Guardian]

Cannabidiol, or CBD, is now available in the UK in everything from skin creams to beers. But don’t set your hopes too high.

What Exactly is Marijuana Dependence? [The Marijuana Times]

My purpose is to distinguish between the words “addiction” and “dependence”. Many who address this issue use these words interchangeably, and this leads to a lot of confusion.

Researchers at the University of British Columbia have published a study revealing that there may be more types of cannabinoids than expected in many strains of cannabis and also that CBD and THC are not as important for understanding different strain effects as previously thought, according to Nature.

Now that cannabis is legal, let’s use it to tackle the opioid crisis [The Conversation]

They cost about $11 and contain 60mg of THC, the main psychoactive component of marijuana, and 10mg of CBD.

Rap music videos ‘glamourise’ drug use, warns a new study. Cannabis and tobacco are frequently featured in videos by top rappers such as Snoop Dogg and A$AP Rocky – increasing the risk of teenagers picking up the habit, say researchers. They described it as an alarming trend – and called for government regulation to combat the growing problem.

One of the great things about legalization – and there are many – is that it allows talented people who had previously been considered criminals to come out from the shadows and share their gifts with the world. This is especially true of cannabis growers. In another time and place they would have been praised for their abilities to grow life-saving and quality-of-life-giving medicine. And thanks to the work of legalization advocates all over the U.S., this country is becoming more and more like that place in time.

Boomers, remember the real – and perceived – harms of cannabis use [The Globe and Mail]

Some people will smoke, or otherwise consume, pot but probably not many more than did before it was legal. According to Statistics Canada, 42.5 per cent of Canadians have tried cannabis at some point in their lives and 16 per cent have partaken in the past three months.

Canopy Growth, was the first Canadian marijuana grower to debut on the New York Stock Exchange. Valued at more than $10 billion, Canopy is worth even more than Bombardier, the Canadian manufacturer that is one of the world’s largest makers of planes and trains, offering a stark example of this nation’s new get-rich-quick hope — the marijuana industry.

In an email announcing the cannabis survey last week, the American Bankers Association (ABA) said that responses will be used by the national organization and its affiliated state bankers associations “to help illustrate to regulators and legislators the need for greater clarity” on the issue.

When Canada becomes the first Group of Seven country to legalize recreational cannabis on Wednesday, market observers say it will amount to a “soft launch,” with the full financial effect of this multibillion-dollar industry still years from being realized.

The British playwright Leo Butler signed up for a similar scientific study while writing his new play “All You Need Is LSD,” which opened at the Birmingham Repertory Theater last week. In 2014, Mr. Butler took part in the drug’s first neurological study in Britain in more than 50 years, in which LSD’s effects were monitored using neuroimaging techniques that measure brain activity. The aim was to better understand the nature of the psychedelic experience. 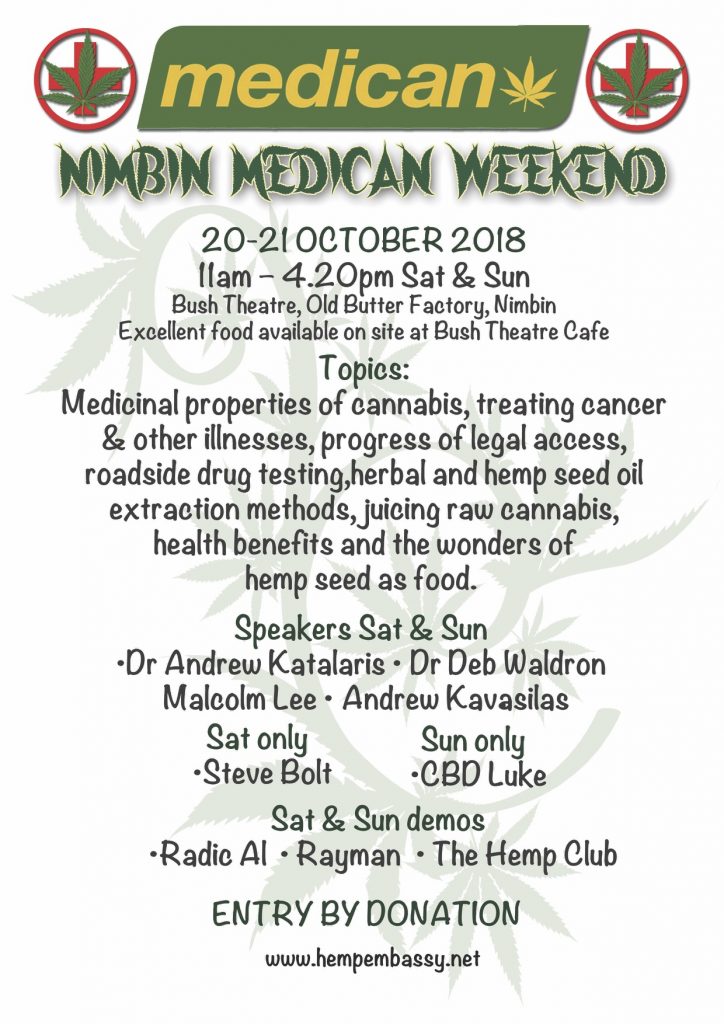 “I’ve tried to write an honest account of what it’s like for someone to come from a very un-parliamentary background, into a balance of power position in an Australian Parliament”, Fiona Patten said. “There are many similarities between my old career and my new one – although you are much more likely to be screwed in politics these days than in the sex industry. Machine politics, revenge and religion have turned politics toxic even in the last couple of years”. Read about Fiona Patten’s Track Record on Law Reform of Drug and Other Social Issues.

‘Exposing The War On Drugs’ looks at how the war on drugs has affected Australia and the rest of the world.