John Shipton, Julian Assange’s father, who is campaigning to build a world-wide movement to save his son, will speak in Mullumbimby at the RSL on December 8 and in the Nimbin Town Hall on December 12.

Mr Shipton has recently returned from visiting Julian in England, and from Europe where he has been rallying support and he will report on Julian’s prospects of being dragooned to the US to face espionage charges, and on Julian’s health, which has become a major concern with many supporters feeling he may die in prison.

This week a group of 60 doctors wrote an open letter to the British Home Secretary saying they felt Assange’s health was so bad they feared he could die in prison and requested he be transferred from Belmarsh Prison to a university teaching hospital. They based their views on the way he looked at his most recent court appearance As well as a report by Nils Melzer, the UN Rapportuer on Torture, which said the arbitrariness and ongoing judicial abuse Assange had been subjected to by the US, the UK and Sweden amounted to legal torture and could end up costing his life.

Recently James Ricketson, an Australian journalist/filmmaker who was imprisoned in Cambodia for 15 months, expressed these concerns powerfully in a public letter to Prime Minister Morrison, urging him to intervene to save Julian’s life. His letter began:

“Julian Assange Dies in Prison Cell.” This is a headline that I am sure you do not wish to read in the near or distant future. It is a headline that you have it within your power to prevent from becoming a tragic reality. I speak from experience. As a journalist/filmmaker I spent 15 months in a Cambodian prison on espionage charges that the Australian government knew to be politically motivated. Then prime minister Malcolm Turnbull intervened on my behalf to secure my release.

“You can pick up the phone, Mr Morrison, and speak with whoever the United Kingdom’s next prime minister is; requesting that Assange not be extradited to the United States to face the very real possibility, if not the certainty, that he will die in prison…  Would you approve the extradition of an Australian citizen to China or Saudi Arabia under the circumstances that prevail in Assange’s case?

“If Assange does die in prison will you, with a clear Christian conscience, be able to inform the Australian public, in all honesty, that you did all within your power (and more) to protect Assange’s legal and human rights.”

James Ricketson wrote about the rising tide of voices being raised in support of Australian government intervention in Assange’s case and he called on Labor and the coalition to unite to intervene to save Julian. John Shipton is hoping to build on these concerns.

Speaking with John Shipton will be Ciaron O’Reilly, a Catholic Worker and Ploughshares activist who has served time for his anti-war protests in the US and Ireland, disarming US bombers on their way to bomb Iraq in the First and the Second Iraq wars. A supporter of Assange, he has been an organiser of demonstrations outside the Ecuadorian Embassy and Belmarsh Prison.

As an ex-prisoner, O’Reilly said:

“The prison system is designed to isolate, demoralised and defeat the resister. In the case of Julian Assange, the British government has double downed placing him in a Category A prison, initially serving a sentence for a bail breech of which there was never a charge! Within Belmarsh Prison they have moved Julian out of general population into isolation and 22 hour daily lock down. He is subjected to “control moves” to avoid any contact or fellowship with other prisoners. These confinement policies are designed to breakdown the mental and  physical health of Julian Assange.”

O’Reilly encourages supporters to write to Julian in jail:

“I know from my own two years experience of being an anti-war prisoner in the U.S., Europe and Australia that the only anti-venom is the sense of solidarity & community we can muster for the prisoner on the outside. I have been with Julian in the Ecuadorian embassy when he opened solidarity mail and witnessed the nourishment it brings him. I encourage everyone to write to Julian Assange in Belmarsh Prison.

“Julian Assange is in there for us. We’re out here for him!” 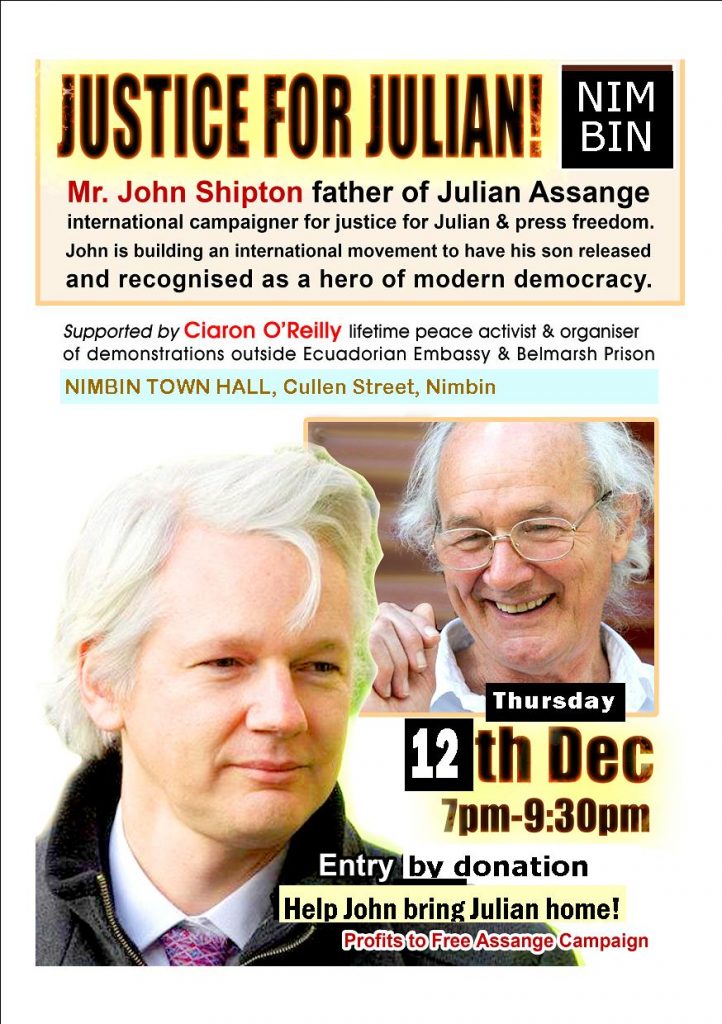