Everyone is welcome to go to virtualmardigrass.com, register and send in entries to the Hemp Olympix joint rolling and bong throw events, Pot Poetry and Pot Art, the HEMP Fashion Parade, Weed Laughs and the MardiGrass Music Awards. There’s plenty of free tickets to the next real on the ground MardiGrass to be won.

There are many Australians who would welcome being able to source CBD over the counter – and here is your chance to have your say! Both the proposal (item 2.5 on this page) and the application to amend the scheduling of cannabidiol as outlined in the Public Notice of 17 April 2020 (item 2.2) will be referred to the June 2020 Joint ACMS/ACCS meeting. The due date for feedback is 15 May 2020. Instructions on how to respond can be found here.

When Max Hill looks you in the eye, he still has the piercing gaze of the drug cop he used to be.

Dr Rickcord believes medicinal cannabis should have a prominent place in the treatment of certain conditions and that increasingly society is beginning to perceive it as effective medicine provided it is dispensed in an informed, safe manner.

Wholesale prices for medical cannabis plummeted in Michigan after a change in regulations that prevents caregivers from selling into the recreational market caused them to offload large amounts of flower into the medical market. Fefore the change in the law, wholesale pounds of medical marijuana flower were selling for around $4,000 a pound. But that price fell to $1,800-$2,200 a pound in the past few weeks

How Legalizing Marijuana Could Help Kick-Start The US Economy

Legalizing sales of recreational marijuana could add tens of thousands of high paying, quality jobs at all education levels in states across the US. Aside from tax revenue, this is another reason large US states like New York that have been deeply affected by the virus may try to speed up legalization. 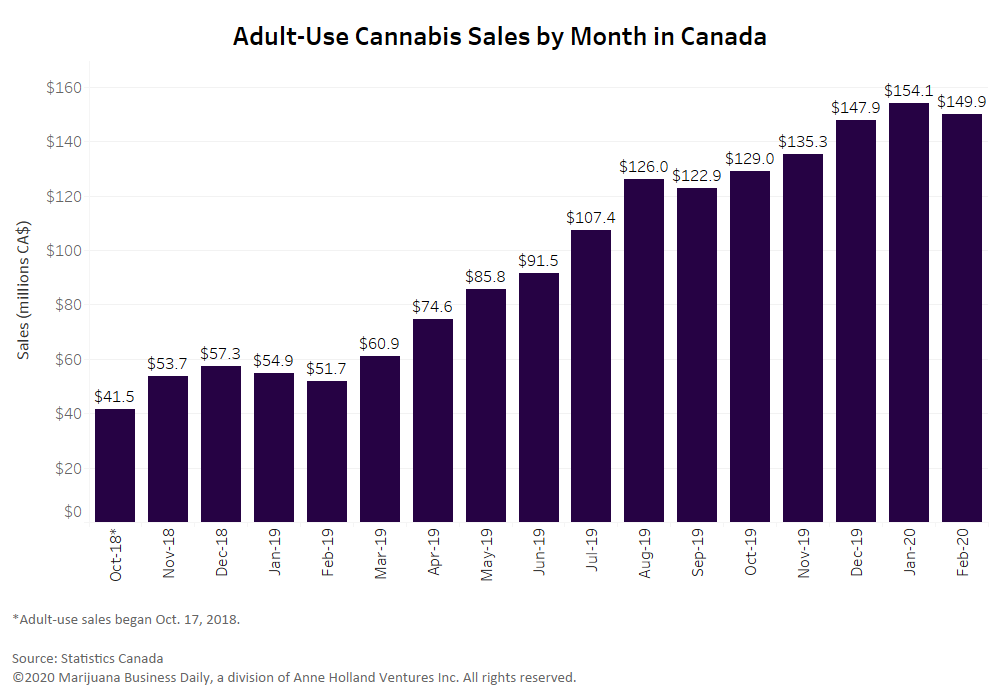 Webinar to look at cannabis opportunities for UK farmers

The crop grows particularly well in the UK, but farmers are struggling to break into the market, for legislative reasons amongst others.

UK patients have begun receiving medical cannabis through the post, as the coronavirus pandemic has left them unable to access the drug any other way.

Police in northeastern Switzerland have shut down an indoor hemp-growing operation and detained its operator after a search of the property unearthed cannabis plants and biomass that exceeded legal THC levels.

Just under 4,000 kilograms (8,800 pounds) of recreational marijuana was sold via Uruguay’s pharmacies since the program was launched in July 2017, according to a recent report from the Institute for the Regulation and Control of Cannabis (IRCCA). Sales would have been higher had enough supply been available for registered consumers, according to the regulator’s report.

Mexico’s deadline to legalize cannabis has been extended to Dec. 15.

If you are interested in learning more about CBD topicals, our CBD topicals guide will provide you with all of the information you need to get started.

Grandma gets high: Why seniors are consuming cannabis

Seniors have established themselves as some of the most enthusiastic cannabis consumers in the US, although their presence in the world of weed sometimes flies under the radar.

There is no difference between the effects of indica and sativa marijuana strains, scientists say

For decades, marijuana growers, sellers, and consumers have classified strains as “indica” or “sativa” to explain the type of effect they would have when consumed. But that classification system was faulty to begin with, and the advent of molecular testing proved that there is no sense in splitting them up into indica and sativa. There’s not a simple way to create a more accurate system, however, so the indica-sativa dichotomy endures.

Here’s an inside look at one of the country’s first licensed outdoor cannabis grows. It spans 100-Acres, and it might just be the most beautiful thing you’ll lay eyes on today.

In an excerpt from Ed Rosenthal’s latest book, the infamous cultivator seeks advice from noted cannabis breeders on growing the highest quality strains.

The History of Kush in America

A detailed look at the history, evolution and challenges surrounding these popular varieties.

As the hemp industry develops and more resources become available for crop production, advocates of sustainable production say farmers have a choice: Hemp can be a crop that heals – or it can follow in the same footsteps of other commodities that have caused mass erosion, soil contamination and groundwater pollution.

Despite being legal now in 33 U.S. states, millions of Americans are getting arrested for cannabis possession — and a disproportionate number of them are black. That’s the summary of a new report — Tale of Two Countries: Racially Targeted Arrests in the Era of Marijuana Reform — released by the American Civil Liberties Union (ACLU) on 4/20, cannabis culture’s most important day of the year.

The U.S. DEA Removes CBD From the Controlled Substances Act – But There’s A Catch

Epidiolex, a medication made with CBD that is used to treat certain types of epilepsy, will now be marketed as a normal medication. While this is fantastic news, it’s also a bit confusing since CBD is already federally legal. While this announcement effectively removes CBD from the controlled substances act, much remains to be understood about how the U.S. regulates cannabidiol.

COVID-19 is spreading through the U.S. prison system like wildfire and people who remain locked up on cannabis and nonviolent drug charges are being forced to face their mortality.

So, you’ve already tried out THC or CBD, and want to know more on how to smoke other cannabinoids, such as CBG hemp flowers.

Support this year’s 4/20 by buying illicit and being open about weed use, organizer says

This year Vancouver’s 4/20 revellers can catch a live stream of 4/20 celebrations from the comfort of their own couch, organizer and veteran weed activist Dana Larsen said. To support the protest they should consider voting with their wallets and buying from a local dealer instead of a regulated store, he said. Everyone can help battle stigma against drug use by being open and proud about their cannabis consumption, and demand change by calling their local politician to say drug prohibition is wrong, he added. This is the first time in 26 years that Vancouver’s 4/20 cannabis protest has been cancelled.  Larsen said he’s sad that the world’s longest running cannabis protest has to be online this year, but hopes the pandemic will highlight some of the things the 4/20 protest advocates for.

Cannabis in the Time of Coronavirus

We’re continuing our investigation of drugs under quarantine, reporting on the impact of the coronavirus on cannabis’s biggest holiday, 4/20, and the marijuana marketplace as a whole.

Introverts, Marijuana, And Getting High During the Coronavirus

Introverted people can find the normal social world exhausting. That’s why many of them have weathered the stay-at-home orders better than others. This is especially true for those who enjoy cannabis.

The owner of pioneering cannabis magazine High Times said Tuesday it is acquiring 13 operating and planned marijuana retail stores in California for $80 million. The purchase, which is being made mostly in stock, reflects an aggressive move into retail under the company’s new management team.

These groups are greening up the cannabis industry

Across the United States, cannabis cultivators, processors and growers are embracing a wide range of remarkable initiatives to make their businesses more sustainable and energy efficient. In Colorado, a state agency is leading an initiative to capture carbon dioxide from a brewery to re-use in a cultivation facility. A new grow operation in Massachusetts installed over four acres of solar panels on its roof and a high-efficiency “microgrid” on its campus. And more companies are turning to hemp as a pragmatic and sustainable alternative to plastic packaging.

From 2018 to 2019, legal cannabis sales worldwide grew 46 percent to $14.7 billion, according to market researchers BDSA and Arcview Market Research. Comparatively, the sector saw a 16 percent growth in 2018.

Everyone is welcome to go to virtualmardigrass.com, register and send in entries to the Hemp Olympix joint rolling and bong throw events, Pot Poetry and Pot Art, the HEMP Fashion Parade, Weed Laughs and the MardiGrass Music Awards. There’s plenty of free tickets to the next real on the ground MardiGrass to be won.

Unharm is launching Story Lab, a training program for eight people based in NSW to share their stories with the public and media, to shift the story about drugs in Australia by putting human stories to the forefront.