HEMP Party President and candidate Michael Balderstone, who turns 72 during the by-election campaign, has passionately continued his protest for justice since the HEMP Party began in 1992.

If Michael wins he will move to Eden-Monaro and be closer to Canberra for work on Cannabis law reform. “You’re allowed to smoke there now.”

“Why can’t we all grow a couple of plants like in Canberra which is surrounded by this electorate? If we were allowed home-grown for personal use across Australia, we could save billions in health care and policing costs. We could be saving money instead of wasting it.

There’s plenty of work to do on law reform, the federal government needs to step in on sniffer dogs and saliva testing which are driving people to use dangerous drugs. It’s absolutely clear our federal politicians have no idea about a genuine medical cannabis regimen.

Current laws fail to address the criminality of millions of ordinary Aussies who enjoy a toke. It’s time to end the war and instead tax and regulate to create investment opportunities plus thousands of Cannabis industry jobs, just like we see in the USA and Canada.

The last 3 years of so-called ‘legal medical cannabis’ in Australia has been too slow and an expensive total disaster for us all. Australians must have legislation to address their immediate needs and the concerns of an ever-increasing number of chronically ill patients who use Cannabis for medical purposes.

The debate on medical use needs to mature and develop in line with other countries. We need specific interim measures implemented and fine-tuned over a period of 12 months or until new policy decisions are legislated.

The HEMP Party proposes a moratorium and amnesty in relation to the broader issue of prohibition impacting society. Redirected funding from law enforcement, which has failed disastrously in social and financial terms, would be better spent on natural disaster relief and essential services, particularly in Eden-Monaro.

The HEMP Party scored well in the 2019 federal election with 1.8% of the primary senate vote. Via the privacy of the polling booth, more than 260,000 voters sent a clear message that Cannabis law reform is their policy priority and voters displayed faith in HEMP to negotiate with the government on Cannabis related issues. 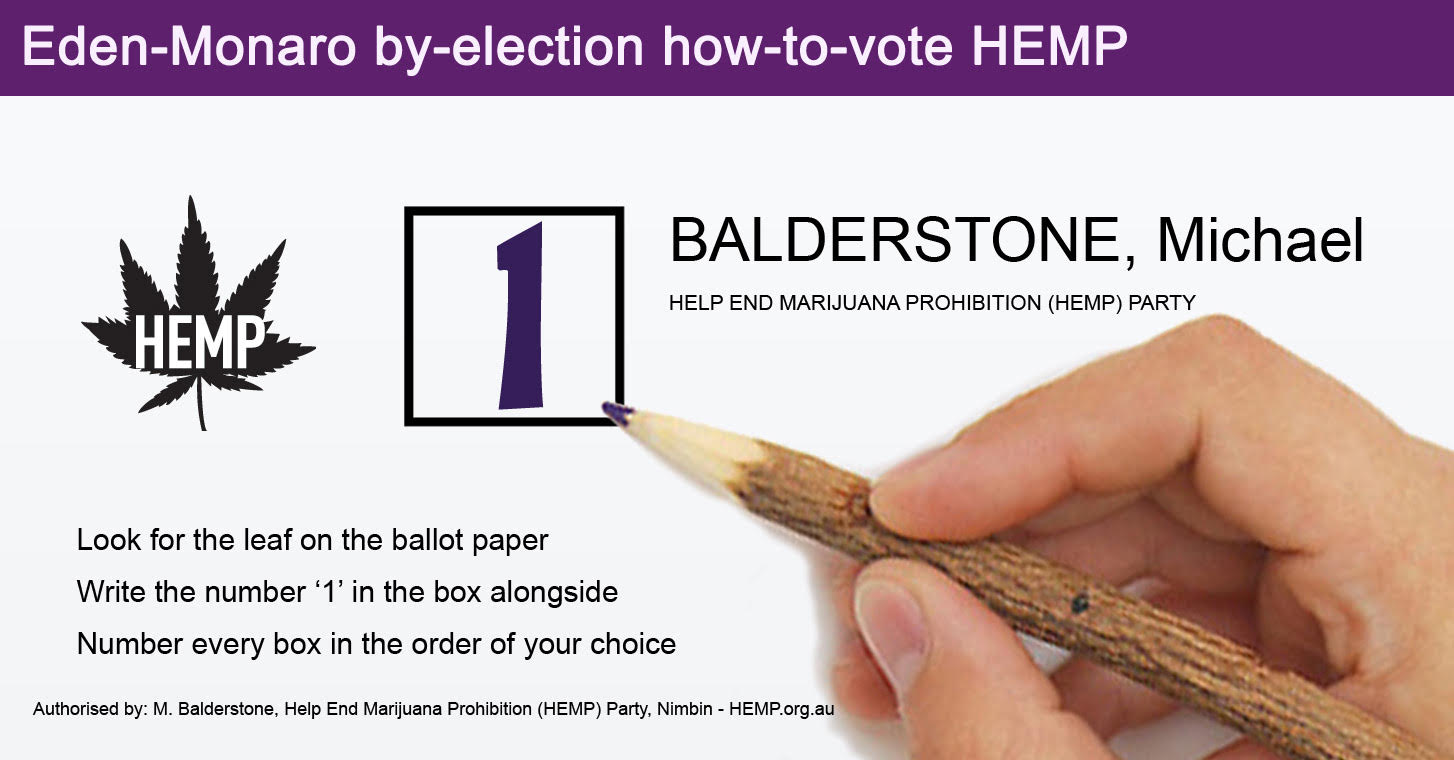 Look for the leaf on the ballot paper.

Write the number ‘1’ in the box next to the HEMP Party candidate Michael Balderstone, and the numbers ‘2’, ‘3’ and so on against all the other candidates until all the boxes have been numbered, in order of your preference. You must number every box for your vote to count.