Campaign diary of the South Brisbane electorate 2020 from the outsider-insider view of a journalist running as an independent candidate.

Two weeks ago I nominated as an independent candidate for the seat of South Brisbane in this year’s Queensland election. As a citizen journalist, the election provided me with an alternative public platform to my weekly radio reports and, despite covid, it has proven to be a more public connection and a valuable extension to my role as a citizen journalist.

The two main stories I have covered this year have been the Julian Assange extradition hearing and the crisis in Queensland’s justice system, and by standing for parliament I have a platform to advocate for important justice reform issues, such as legalising cannabis.

I’ve done two meet-the-candidate zoom meeting and at the first Zoom meeting, Clem Grehan, the LNP candidate replied to my case for the benefits of legalising cannabis by saying he supported decriminalisation. “Yes, I would like to see marijuana decriminalised immediately,” he said. 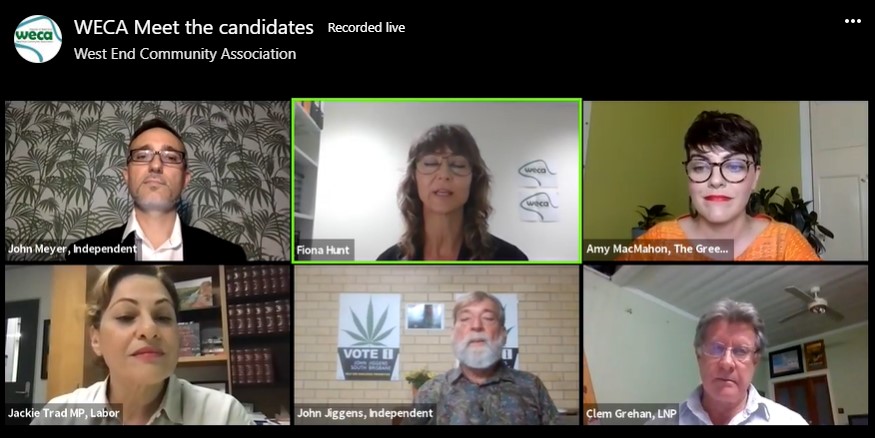 I stood for South Brisbane because I expected it to be very closely watched and the next day Channel 7 confirmed this by leading their election coverage by reporting on our South Brisbane meeting. Cannabis, they said, had been a hot issue. They confronted LNP leader Deb Frecklington with what Clem Grehan had said.

Unfortunately, the media were content to play their Gotcha! game with Clem, who was noticeably absent from the next Zoom meeting, by characterising him as another LNP candidate causing trouble by advocating a soft-on-drugs message. Annoyed, Deb Frecklington replied by saying she was a very strong advocate against drugs.

The Greens Amy MacMahon, who is the favourite to win South Brisbane, also spoke in support of changing the cannabis laws and said that the Greens policy was the decriminalisation of cannabis. Ms MacMahon is favoured because the LNP have decided on a strategy to preference against sitting members, so all the sitting inner-Brisbane Labor members are under threat from the Greens.

The other contender, the current member for South Brisbane, the ALP’s Jackie Trad, conspicuously said nothing about cannabis law reform. Ms Trad is the former Deputy-Premier and her fate is one of the main reasons for the intense interest in the South Brisbane electorate.

Jackie Trad is intensely hated by the Murdoch Press, who refer to her, in true Trumpian style, as Dodgy Jackie. They have written scores of articles alleging, on the flimsiest of evidence, that she is corrupt because she spent her own money buying a small investment property in her electorate. In contrast, Murdoch’s marauders are devoted to He Who Was Renamed, Scomo, despite the evidence that the Morrison government spent hundreds of millions of taxpayers money during the last election in the Sports-Rorts scandal, an affair that reeks of corruption. There is an apocryphal story about Rupert Murdoch trying to influence a WA politician and saying, “Look! You can have a headline a day or a bucket of shit!!” And the Murdoch press who own all the major newspapers in Queensland give the Morrison government the headline-a-day treatment, while Jackie Trad gets an intensive bucketing. Effectively, this has led to a silencing of Trad because she is the one politician the Murdoch press are most desperate to play Gotcha! with.

At the start of the election, former PM Kevin Rudd launched a petition calling for a royal commission into the abuse of media monopoly in Australia, particularly by the Murdoch empire. He spoke of the danger of the sheer concentration of media power in Queensland, a state which often swings elections, and where Murdoch owns almost all the newspapers. For the sake of democracy in Queensland and Australia, it was vital to maximise media diversity in Queensland, Kevin Rudd said. He described the Murdoch press as a cancer on democracy, an especially arrogant cancer, a vehicle to blatantly support one side of politics over another, having an unmatched power to determine governments by running negative campaigns, even smear campaigns, against the ALP and favourable narratives for the LNP. Murdoch has loss-making newspapers, said Rudd, but he keeps them and he buys even more to maximise his political power to pursue his ideological agenda like climate change denial, or his commercial interests as in the NBN. Finally, said Rudd, it was the sheer arrogant, swaggering, and bullying behaviour by Murdoch and his editors against anyone who dares to stand up to them that he most deplored.

I couldn’t agree more. Although I am running against Jackie Trad and hope to take votes off her, her relentless bullying by the Murdoch press appalls me.

Dr John Jiggens is an independent candidate in the seat of South Brisbane. He is a writer, former academic and a journalist, who was the founding editor of the Westender and The Cane Toad Times and who has been a ZZZ journalist over several decades. His PhD was Marijuana Australiana: Cannabis Use, Popular Culture and the Americanisation of drugs policy in Australia. The Joke, a rewrite of his thesis, will be published shortly.