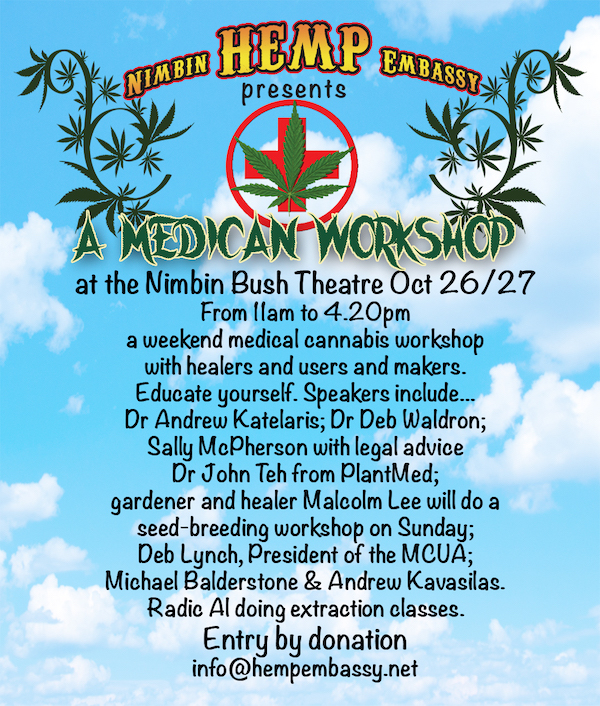 There’s a full program with a few twists lined up for the next Medical Cannabis weekend workshop in Nimbin’s Bush Theatre over the weekend of October 26 and 27.

Dr Pot and Dr Deb are coming as usual, along with PlantMed director Dr John Teh whose clinic in Brisbane is busy with those who want and can afford legal mediweed. Lawyer Sally McPherson is coming again with legal advice as well as some first hand stories from the corridors of power in Canberra. Sally and army vet Lee James Donnollan recently accompanied United in Compassion’s Lucy Haslam to a meeting with members of parliament asking them to waive his charges after Queensland police caught him growing cannabis. Greens leader Richard Di Natale asked for an amnesty for those charged with accessing medical pot, and at least Jacqui Lambie was listening, said Sally.

Grower and breeder Malcolm Lee plans on holding a special breeding workshop on the Sunday teaching people how to create feminised seeds. Deb Lynch is speaking at the Medican also, as co-president of the Medical Cannabis Users Association [MCUA]. MCUA currently has around 7,000 members and Deb has been a tireless worker for cannabis for decades.

The MCUA of Australia Inc is a not for profit, patient oriented organisation that has been working since 2014 to raise awareness about the health benefits of cannabis; to expose the high patient demand that already exists within our society and to lobby our politicians about the need for law reform in this area.

Andrew Kavasilas, technical director for Cann Global (CGB:ASX) will fill us in on the latest from the governments endless discussions on how to regulate us out of existence. The Hemp Club will be displaying hand woven hemp clothes and the latest hemp building bricks they are experimenting with as well as demonstrating hemp seed oil extraction. The Australian Cannabis University will have a stall and Radic Al will be demonstrating various plant extraction methods all weekend.

“We urge anyone interested in medical cannabis to come along as this is a rare chance to speak one on one to people with experience,” said Michael Balderstone, President of Nimbin’s HEMP Embassy who is hosting the event.

The Bush Theatre cafe will be serving food and drinks on site and Saturday evening we plan on showing the movie Green Light, a new feature length Australian documentary, directed by Ned Donohoe, about medicinal cannabis and a couple of top blokes giving access to it around Australia.

The talks start both days at 11am.