The accuracy of drug driving tests has been called into question after a landmark court ruling and new research by a leading academic.

Magistrate David Heilpern has delivered yet another landmark ruling that reveals the shonky logic underlying the drug driving regime in NSW. The Lismore magistrate accepted last month that a woman tested positive to cannabis because of passive smoking.

Clive Palmer and his staggering $60 million spend on United Australia Party’s election campaign has only managed to secure 20,000 more Senate votes nationally than a minor party forced to “scratch around” just to field candidates. As of Sunday afternoon the Help End Marijuana Prohibition party had secured 141,500 first preference Senate votes or 1.9 per cent of the national vote, just behind UAP’s 161,000.

“They are willing to put you on all sorts of drugs and then they have a thing about cannabis.”

Legislation introduced to NT’s parliament last week seeks to make it legal to grow and process industrial hemp in the Northern Territory.

A hemp initiative was one of ten projects in Western Australia’s Kimberley region named to receive a Regional Economic Development (RED) grant.

A relaxation of hemp cultivation laws has led to a surge in interest for the growing of non-narcotic industrial hemp, with plots being trialled across all parts of the country.

This is a weekend about sharing information from healers and users and growers and makers of medical cannabis. Everyone is welcome, entry is by donation and it’s a rare chance to meet and get advice from the cannabis healing community, and in fact discuss all aspects of the plant as hemp seed products will be on display and available along with hemp clothing. But largely it’s a weekend for people interested in cannabis as medicine and a chance to educate yourself.

If this effort fails, legislators probably won’t have another shot at adult-use legalization for at least two years.

Let’s take a quick look at the different cannabis laws for each province in Canada, to ease some of the confusion surround this topic.

The Arizona Supreme Court decided unanimously on Tuesday that cannabis extracts including concentrates, vape cartridges as well as infused beverages and food, are now legal and can be sold in dispensaries.

State-controlled medical and recreational marijuana is positioned as giving ‘safe’ access to ‘healthy’ products. But history suggests that decriminalisation would be a better and simpler option.

The House of Commons has backed a motion calling on the government to ensure medical cannabis is made available to “appropriate patients”. The motion was put forward by Mike Penning, Conservative Party MP for Hemel Hempstead, on 20 May 2019. He told the House that “only a handful of prescriptions for whole-plant-extract medical cannabis have been issued on the NHS, which has left a significant number of patients, many of whom are children with intractable epilepsy, with no access to medical cannabis and experiencing severe distress”.

Singapore young more liberal on cannabis than other drugs: Poll [The Straits Times]

Young people in Singapore have a more liberal attitude towards cannabis than other drugs, according to a Home Affairs Ministry (MHA) survey. It also shows that a lower proportion, or 80 per cent, of those aged 13 to 30 felt that cannabis is harmful and should remain illegal. This compares with 89 per cent among those who are older.

Thailand’s Government Pharmaceutical Organisation (GPO) said yesterday it is ready to deliver medicinal cannabis products in the form of sublingual — or under-the-tongue — drops to hospitals nationwide by the end of July. The GPO, a Thai state enterprise that manufactures pharmaceutical products, has been authorised by the Ministry of Public Health to grow cannabis and conduct research into ways of developing related medicines.

Bulgaria has issued its first authorization for a company to sell hemp-derived cannabidiol, or CBD, products freely, in open markets.

The SAHPRA granted three licenses to South African companies to grow medical marijuana for research purposes, as well as local use and export.

Ministers in Luxembourg have outlined proposals for the country’s upcoming legalisation of “recreational” cannabis.

Even though cannabis use in some form is legal in only two-thirds of the states, our burgeoning industry is among the fastest-growing job markets in America. According to cannabis information hub Leafly’s 2019 Cannabis Jobs Count, cannabis directly employs more than 211,000 full-time workers in the U.S. Add indirect jobs and the total number of full-time workers dependent on the legal cannabis industry hits nearly 300,000. No wonder Leafly calls cannabis “America’s hidden job boom.” The industry added more than 64,000 jobs last year — a 44% increase — and is expected to create another 20,000 jobs this year in California and Florida alone.

The mainstreaming of cannabis is making big alcohol nervous. U.S. alcohol consumption dropped every year for the last three, led by declining beer sales, which have fallen 2.8 percent since 2015. One analyst told Bloomberg beer is “the canary in the coal mine” for the alcohol industry. “You’re seeing an erosion among consumers who now are able to choose between cannabis and beer,” said John Kagia, an analyst at New Frontier Data.

Here’s a little bit of relief. Over the Memorial Day weekend, the Transportation Security Administration [TSA] announced that its agents won’t hassle you over a little CBD. As Marijuana Moment first reported, the TSA updated its website’s “What Can I Bring” section on medical marijuana to state:

Cannabis oil restaurant shut down ‘despite police go-ahead’ [The Guardian]

In stark contrast to cannabis, the study indicates that alcohol, sedatives, and other recreational drugs greatly increased the likelihood of causing a traffic accident.

Since the rise of drug culture decades ago this fast-growing, fibrous plant has been widely vilified, shunned and prohibited, but that is now changing.

“The energy storage industry is starting to take notice, thanks to new Canadian research that shows supercapacitors with electrodes made from hemp-based carbon nanosheets outperform standard supercapacitors by nearly 200%.”

For European hemp grower Endoca, its own standards for “organic” go beyond standard label practices. It’s more of a mission: farming in a way that works to build a sustainable future for the planet from the seed through the end manufacturing and packaging process.

Is it time to get with it and get rid of the term “black market”? [The Growth Op]

The Future of Cannabis Consumption [CLN]

So, what is next for social consumption in the US and around the world? Will there one day be cannabis clubs in every state where consumers can partake with likeminded individuals? 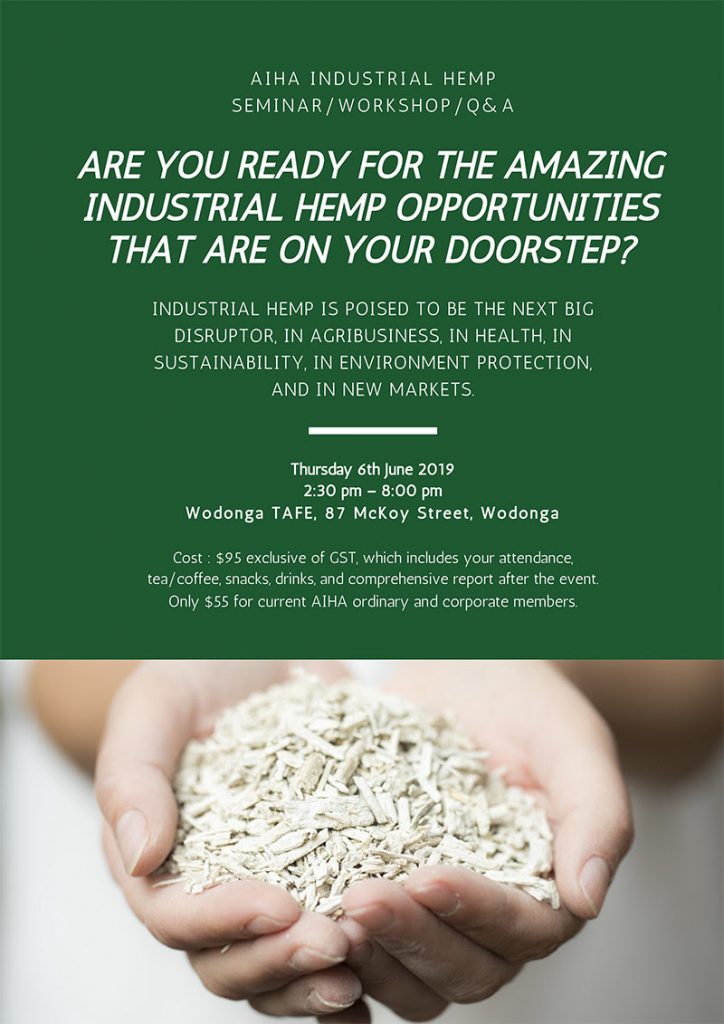 This is a weekend about sharing information from healers and users and growers and makers of medical cannabis. Everyone is welcome, entry is by donation and it’s a rare chance to meet and get advice from the cannabis healing community, and in fact discuss all aspects of the plant as hemp seed products will be on display and available along with hemp clothing. But largely it’s a weekend for people interested in cannabis as medicine and a chance to educate yourself.