Investment strategist Mark Bernberg, who’s launched an investment consultancy for the cannabis industry, believes that Australia could legalise the drug for recreational use within five years and that the company that will ultimately become the Amazon of cannabis doesn’t exist yet.

It all began with a concept from a group of West Australian families who wanted to live in a beautiful urban precinct designed to give rise to a community and provide a visual connection with their neighbours. The dream became reality for residents of Denmark’s ‘hempire’ after moving into their eco-development in September. The village features 12 dwellings built using a unique product called hempcrete, on a block of land located just a stone’s throw from the centre of town. Cutting-edge solar technology powers the site which has a design life of more than 100 years and an energy rating of 9.2 stars.

One of Australia’s top neurosurgeons is at the forefront of a world-first trial testing whether medical cannabis could be used to treat aggressive brain cancer. Professor Charlie Teo and nutritional supplement company BioCeuticals are leading the clinical trial, which is examining if the plant-based tonic can ease symptoms and maybe even slow cancer growth in sufferers of Glioblastoma, or GBM.

“Cannabis is medicine”. That’s the message this morning splashed across Auckland’s largest digital billboard on the corner of Anzac Avenue and Beach Road in the first advertising campaign from a licensed New Zealand cannabis company. Helius Therapeutics, the Kiwi cannabis start-up bought into by rich-lister Guy Haddleton, today launched a nationwide advertising campaign that aims to reshape the reputation of cannabis from black market recreational drug to a legitimate treatment. 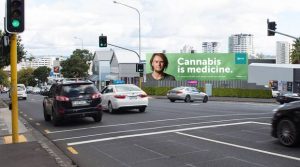 2019 is shaping up to be a good year for New Mexico’s medical marijuana market, with action favorable to the industry expected from judges, legislators and a newly elected pro-cannabis governor.

Oregon regulators will allow medical marijuana to be delivered to patients who live in areas of the state where licensed cannabis activity is prohibited and also increase the daily purchase limits for MMJ cardholders.

It is a historic time for hemp and CBD. Donald Trump today signed into law The Agricultural Improvement Act of 2018, also known as the 2018 Farm Bill, which contains provisions to legalize hemp. The new law lifts the longstanding ban on hemp, and brings the highly versatile crop back to America where it has a long history. Included in the monumental bill is the Hemp Farming Act of 2018, a provision that amends the federal list of controlled substances with regard to hemp and reclassifies the plant as an agricultural commodity.

The public will have 60 days to weigh in on new regulations for marijuana-infused food, drink.

U.S. marijuana companies are keeping a close eye on the development of Canada’s edibles sector, but executives say the regulations proposed by Health Canada will be burdensome for manufacturers – and ultimately make them less competitive with the illicit market.

Thailand’s legislature on Tuesday agreed to amend the country’s drug law to allow the licensed medical use of marijuana, as well as kratom, a locally grown plant traditionally used as a stimulant and painkiller. The Thai legislation passed its final reading at the National Legislative Assembly by a vote of 166-0 with 13 abstentions.

Israel’s parliament has given its final approval to a long-awaited and controversial law to allow exports of medical cannabis, a move that is likely to boost state coffers.

2018 has been called the “year for cannabis” in South Africa. But there are still hurdles before a legal marijuana industry can flourish in an African economic power deemed ideal for large-scale cultivation.

Beckley Canopy Therapeutics, based in Oxford, England has raised ₤7.4 million for the purposes of cannabinoid research and drug development.

Uruguay Ramping up Cannabis Cultivation 5 Years After Legalizing It [Grizzle]

Uruguay is celebrating the fifth anniversary of its decision to legalize recreational cannabis use and it now plans to ramp up domestic cultivation to meet growing demand. There are now 41,995 people registered to access the legal, recreational cannabis market in Uruguay. However, the country has a population of 3.5 million and it is estimated that many more Uruguayans are still sourcing marijuana from illegal means due to a lack of supply.

Austria’s Minister of Health ordered businesses to immediately stop selling CBD food and cosmetics because the products fall under the European Union’s definition of “novel food.”

As more states have moved to create a legal supply chain for marijuana, less cannabis is being smuggled over the U.S.’s southern border. Based on Border Patrol seizures, smuggling has fallen 78 percent over just a five-year period.

The Food and Drug Administration in the USA is looking for “pathways” to legalize the sale of CBD oil and other cannabis-based compounds in food and beverages in a move that could remove one of the last remaining legal hurdles for companies hoping to sell such products across state lines.

Why Cannabis Could Be Recession Proof [Markets & Money]

Cannabis is a growing industry which will bring in more jobs and tax dollars to the government. And this is attractive during a recession.

Legal weed is everywhere — unless you’re a scientist [Politico]

Americans can legally buy high quality marijuana in most states, but when scientists want to study pot in a lab, they’re basically stuck with schwag. A little-known research facility at the University of Mississippi is the only place in the country that is authorized to grow and test marijuana for medical research purposes. “It’s brown, muddy garbage,” said Peter Grinspoon, a physician and board member of Doctors for Cannabis Regulation, describing the Mississippi stock.

Terpenoids or terpenes for short are responsible for the scents of different plants, flowers, and trees. Not only do these terpenes contain powerful fragrances, they also contain various medicinal and therapeutic effects. In the past, people consumed numerous terpenes to help improve their health. Fortunately for cannabis consumers, over 200 terpenes have been identified in the cannabis plant. Although cannabis is medically, therapeutically, and nutritionally beneficial, the presence of various terpenes in cannabis can positively improve users’ well-being and emotional state of mind to another level.

This is your brain on marijuana…and it looks pretty much the same as the brains of non-users. That’s essentially what researchers concluded after comparing the brain morphology of 140 cannabis consumers and 121 people in a control group. Contrary to most previous research on the subject, they found marijuana use had “no significant effects on cortical surface morphology.”

A new study published in the Lancet Neurology Journal has revealed that a drug made of cannabis is capable of treating motor neuron disease. A clinical trial conducted by scientists revealed that this cannabis-based drug helps to ease muscle movements of patients suffering from this disease.

Canadian middleweight UFC fighter Elias Theodorou suffers from bilateral neuropathic pain. His doctor has prescribed him medical cannabis, but so far he’s been unable to secure a medical exemption from the U.S. Anti-Doping Agency (USADA), which administers the UFC’s anti-doping program.

How do pro leagues feel about marijuana use? It depends. [Boston]

From draconian policies to tacit acceptance, there’s no real consistency to be found.

David Allsop was involved in medical cannabis research, and establishing the Lambert initiative at The University of Sydney.